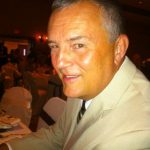 Cj Rylands grew up in Glenshaw, PA a suburb north of Pittsburgh, PA. He first arrived in West Virginia during the summer of 1970 to attend West Virginia Wesleyan College, where he graduated in 1974 with a major in psychology and a minor in business administration. Prior to starting his own business, he worked in construction, historic restoration, real estate, woodworking and underground coal mining.   In the fall of 1992, he and his wife Jeannie started C.J. Maggie’s American Grill.

In 2006, as part of the Buckhannon Planning Commission, he helped develop a new grassroots comprehensive plan for the City of Buckhannon. This launched him into his current role as executive director of Create Buckhannon, whose mission is to initiate and facilitate the goals and objectives of the Buckhannon 2020 Plan, by partnering with anyone willing to focus on successful outcomes.

His primary interest is in property development and downtown revitalization. He serves on the Board of Directors of the West Virginia Community Development HUB and Upshur County Development Authority. Cj lives in Buckhannon, where he and his wife Jeannie raised their three children.