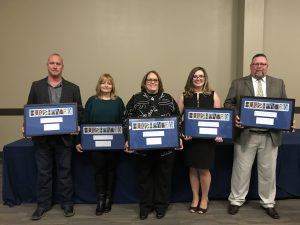 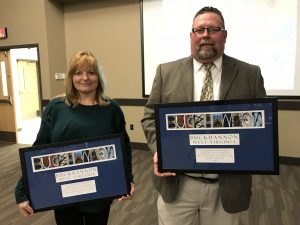 BUCKHANNON, WV:  Thursday evening, three hundred business leaders, government officials and representatives from education, health, and community organizations celebrated local accomplishments and honored those who have contributed to the success of the community at the Annual Chamber of Commerce Dinner held at the Brushy Fork Event Center.

City Councilor and Chamber of Commerce President, Robbie Skinner, served as master of ceremonies and delivered the first award of the night to Stockert Youth & Community Center. Director Debora Brockleman and Mayor David McCauley accepted the award. Skinner noted that Stockert Youth Center has provided youth programming since 1994 and that the state runner-up B-U Lady Buccaneer basketball team first played together at Stockert Youth Center as part of the youth basketball program.

After the event, Mayor McCauley shared that when Joyce S. Stockert bequeathed $500,000 to the Upshur County Commission for “the purchase, construction, and operation of a youth center facility to be designated and named ‘The Stockert Youth Center’, she provided that ‘the operation of the youth center shall … provide for entertainment, instruction, recreational athletics, sport & other wholesome activities for the youth of Upshur County’.” Since its inception, the center has done just that, providing recreation, afterschool tutoring and snacks, and a summer camp, along with a space for sports teams and dance programs to practice. The center welcomes all youth, and is particularly beneficial to those who may not otherwise have a safe place to go afterschool, while providing a snack to all children in a region where we know that some children often get the bulk of their calories while at school. The award serves as added inspiration to the City and community to remain strong in the commitment to Stockert Youth & Communty Center and to continue the planned expansion of the multipurpose gymnasium and auditorium. Please visit https://buckhannonwv.org/about-the-city/donate-syc/ or call City Hall to donate.

Later in the ceremony, Jerry Arnold, Director of Public Works for the City of Buckhannon, received the award “Businessman of the Year.” Arnold began working with the City in May of 1993 in the waste department collecting garbage and maintaining the transfer station. From there, he went on to become Waste Department Superintendent and Street Commissioner. In 2016, City Council promoted Mr. Arnold to the new position of Director of Public Works where he supervises the waste, streets & parks, sanitary sewer, and water departments. Skinner shared that Arnold has successfully overseen renovations to the Colonial Theatre, continued Jawbone Park development, implementation of new toter waste system, improvements to Trader’s Alley, all City street paving projects, establishment of the Buckhannon Dog Park, and employee training and health initiatives during the last two years.

In addition to Stockert Youth & Community Center and Mr. Arnold, the B-U Chamber recognized Lowe’s (Manager Chad Corley accepting) as “Business of the Year,” while Upshur County Administrator Carrie Wallace received the award “Businesswoman of the Year”, and Melodie Stemple of the Upshur County Development Authority won “Citizen of the Year.” The event featured Gayle Manchin as keynote speaker, who delivered a message on the potential for the education and business communities to collaborate, opening more avenues for young people to stay in West Virginia due to increased economic opportunities. The evening also featured a performance by the West Virginia Youth Symphony with pieces ranging from Ashokan Farewell by Jay Unger to Take Me Home, Country Roads by John Denver, as well as an art exhibit of local students’ works and a silent auction with donations from more than forty community organizations.

The City of Buckhannon considers the Buckhannon-Upshur Chamber of Commerce an invaluable partner for the continued success of the Buckhannon community, not only through its members’ economic impact, but also in its support of the arts, recreation, and well-being of our community members. Many Chamber members volunteer their time to sit on City boards and community organizations, bringing critical expertise and knowledge to the table. We see you—and we appreciate you.