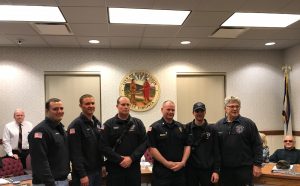 Buckhannon City Council announced James “JB” Kimble as Fire Chief of the Buckhannon Fire Department on Thursday, March 1, after his swearing-in ceremony during the City Council meeting. Chief Kimble will officially step into the role on Monday, March 5. Kimble has served with the Buckhannon Fire Department for 16 years, most recently as Interim Fire Chief following Jim Townsend’s resignation in January. Prior to that, Chief Kimble had served as Fire Captain since 2015, and had stepped in as Interim Fire Chief on one other occasion in 2016 following the departure of Chief Mitch Tacy.

Chief Kimble is married to wife, Megan, and has two children, Jansen and Hoyt. He is an active member of the Buckhannon community and will serve the City well as Fire Chief. Already, he has been actively making improvements to the department through grant proposals, including those for a new fire pumper truck, community fire risk assessment tool, and AED placements around the community.

Chief Kimble’s appointment has received coverage in the local media, which you can view here: