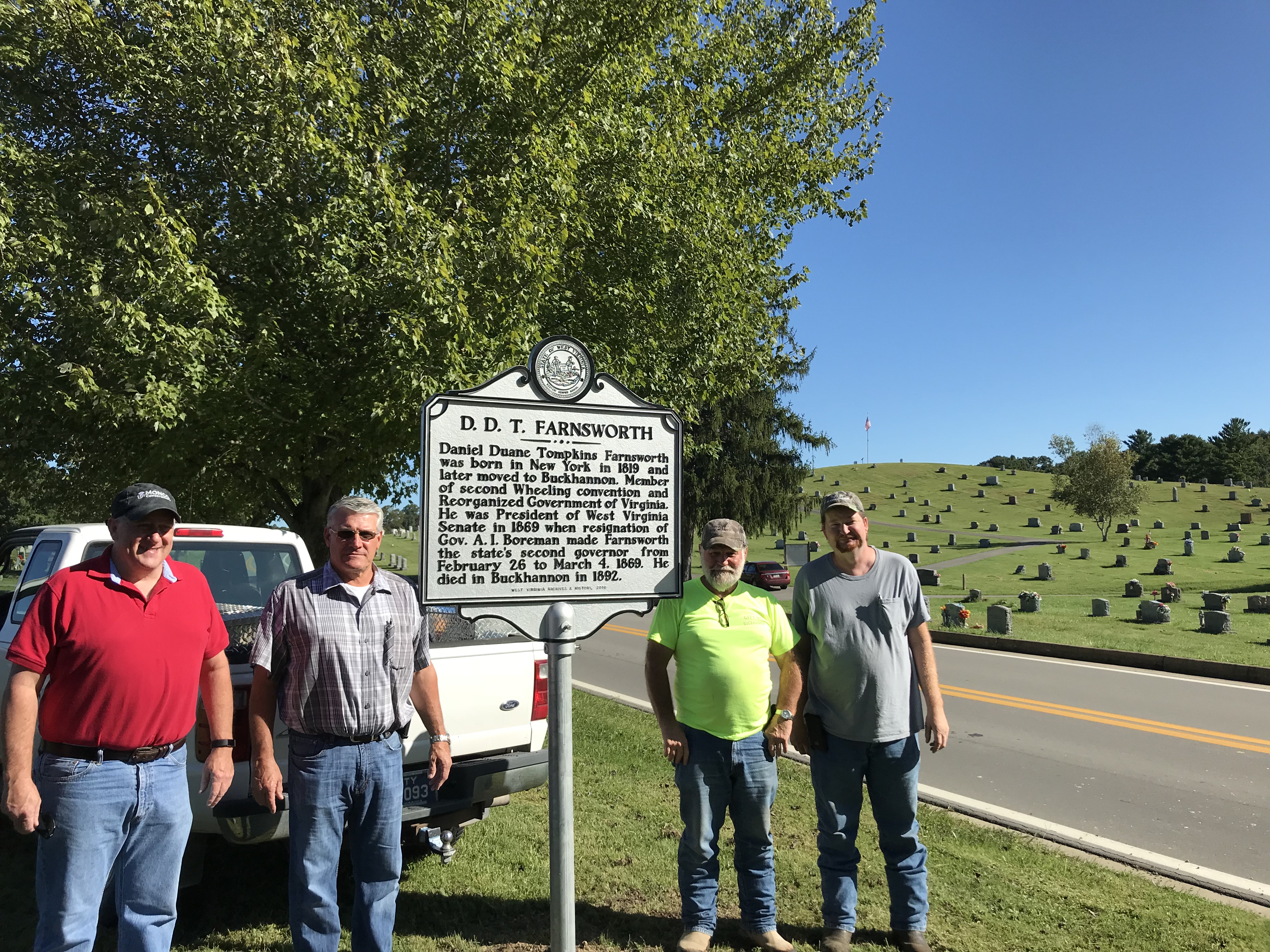 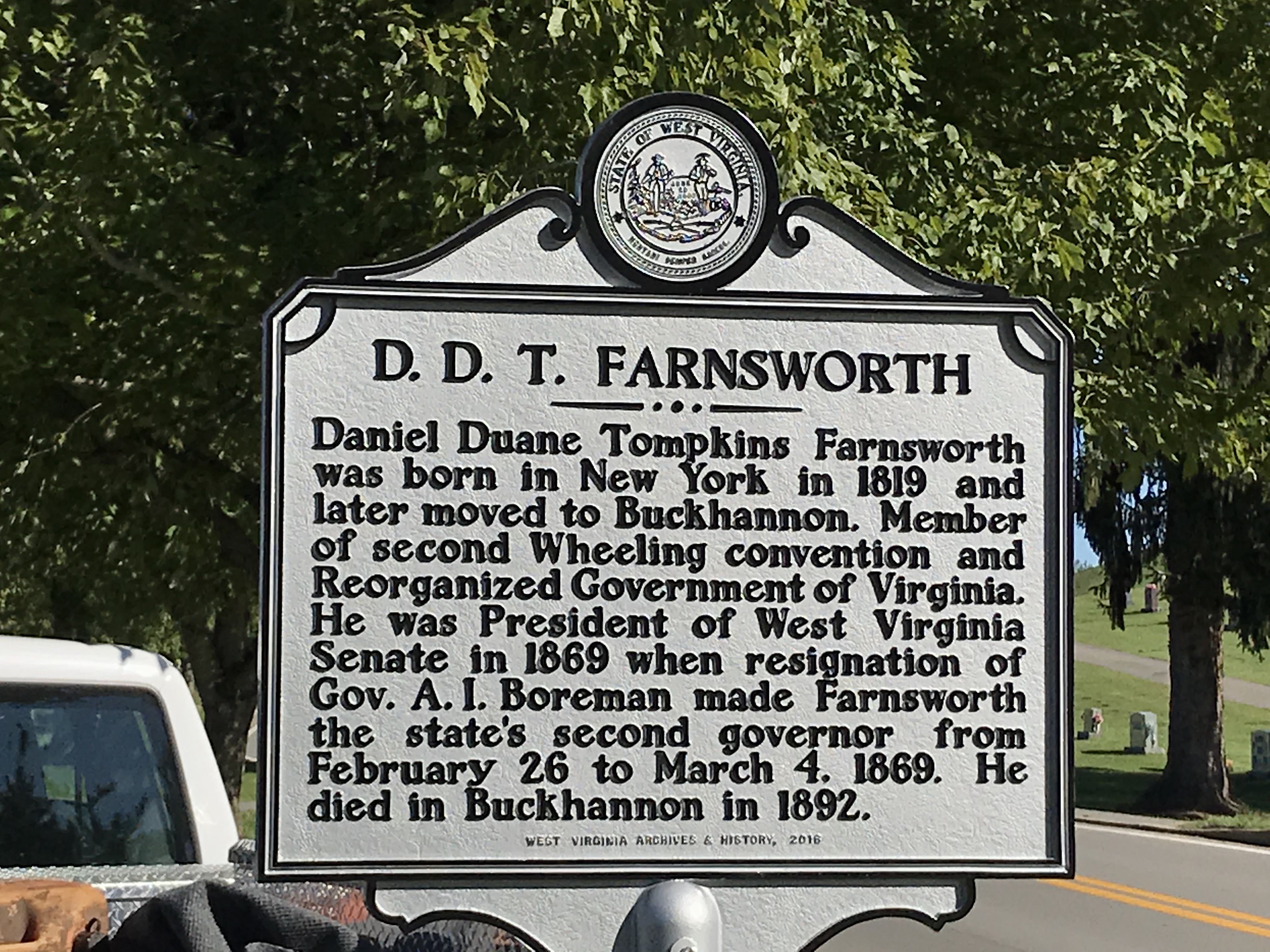 BUCKHANNON, WV: Two prominent figures from the 1800’s, George R. Latham and Daniel D. T. Farnsworth, recently received additional recognition through the West Virginia Highway Historical Marker Program. On September 14th, City of Buckhannon Streets & Parks Department personnel hoisted the signs into place along the Hall Road adjacent to the Heavner Cemetery, which is maintained by the City. The new signs commemorate the lives of Latham & Farnsworth, who both resided in Buckhannon and are now buried at the cemetery.

George R. Latham served as a delegate to the first Wheeling convention during our state’s secession from Virginia. Prior to that, he had recruited a company of Union troops and served in the American Civil War. Latham went on to serve as a United States congressional representative, and then a consul to Melbourne, Australia. In 1875, he returned to West Virginia, settling in Buckhannon and was employed as the Upshur County Board of Education Superintendent until 1877, thereafter working for the United States Census. Latham remained in Buckhannon working in agriculture until his death in 1917.

Daniel Duane Tompkins Farnsworth served briefly as the second governor of West Virginia, following Arthur Boreman’s resignation to assume a seat in the United States Senate in February of 1869. Farnsworth, West Virginia Senate President at the time, succeeded to the governorship for seven days until William E. Stevenson, the third governor who was elected the previous fall, began his term. Farnsworth was “a fiery Unionist” according to the West Virginia Encyclopedia, who risked his life defending the Union cause. He also supported equal rights and labor causes, working to prevent railroad company officials from serving as West Virginia legislators fearing that would give them too much power. Farnsworth’s home has been restored as The Governor’s Inn Bed & Breakfast on Main Street in Buckhannon.

According to Matthew McGrew, Coordinator of the Historical Marker Program, “The first highway markers were erected in 1937.  Since then, this well-known program has seen the installation and maintenance of over 1000 historical markers.  The new markers commemorating George R. Latham and Daniel D.T. Farnsworth were funded in part by a grant to erect 160 new highway markers that addressed topics and individuals related to West Virginia statehood and the Civil War.  The Archives & History section of the West Virginia Department of Arts, Culture, and History gratefully acknowledges the efforts of the Division of Highways, the City of Buckhannon, and the Upshur County Historical Society in placing these two new markers.”

You can visit the cemetery and view the markers any time by traveling north of Buckhannon on the Hall Road to the Heavner Cemetery. In addition to these new markers, you may also visit the Flags of the Fallen memorial, a historically-significant plot with graves of former slaves, and Larry Brown Flagpole Hill. Mail was once dropped and picked up via plane at the top of the knoll known as flagpole hill. The Heavner Cemetery dates back to 1782 and is seeking recognition under the National Registry of Historic Places.

Full readings of each marker:

Daniel Duane Tompkins Farnsworth
was born in New York in 1819 and
later moved to Buckhannon. Member
of second Wheeling convention and
Reorganized Government of Virginia.
He was President of West Virginia
Senate in 1869 when the resignation of
Gov. A. I. Boreman made Farnsworth
the state’s second governor from
February 26 to March 4, 1869. He
died in Buckhannon in 1892.

Born March 9, 1832, Latham opened
a law office in Grafton, where he
recruited a company of Union troops
for his command in 1861. A delegate
to the first Wheeling convention,
he served as a U.S. congressman,
1865-67, and consul to Australia,
1867-70. Latham later was Upshur
County school superintendent and
an 1880 census supervisor. He died
in Buckhannon, December 16, 1917.