Sewer Department thanks Rick Anthony for 20 years of service 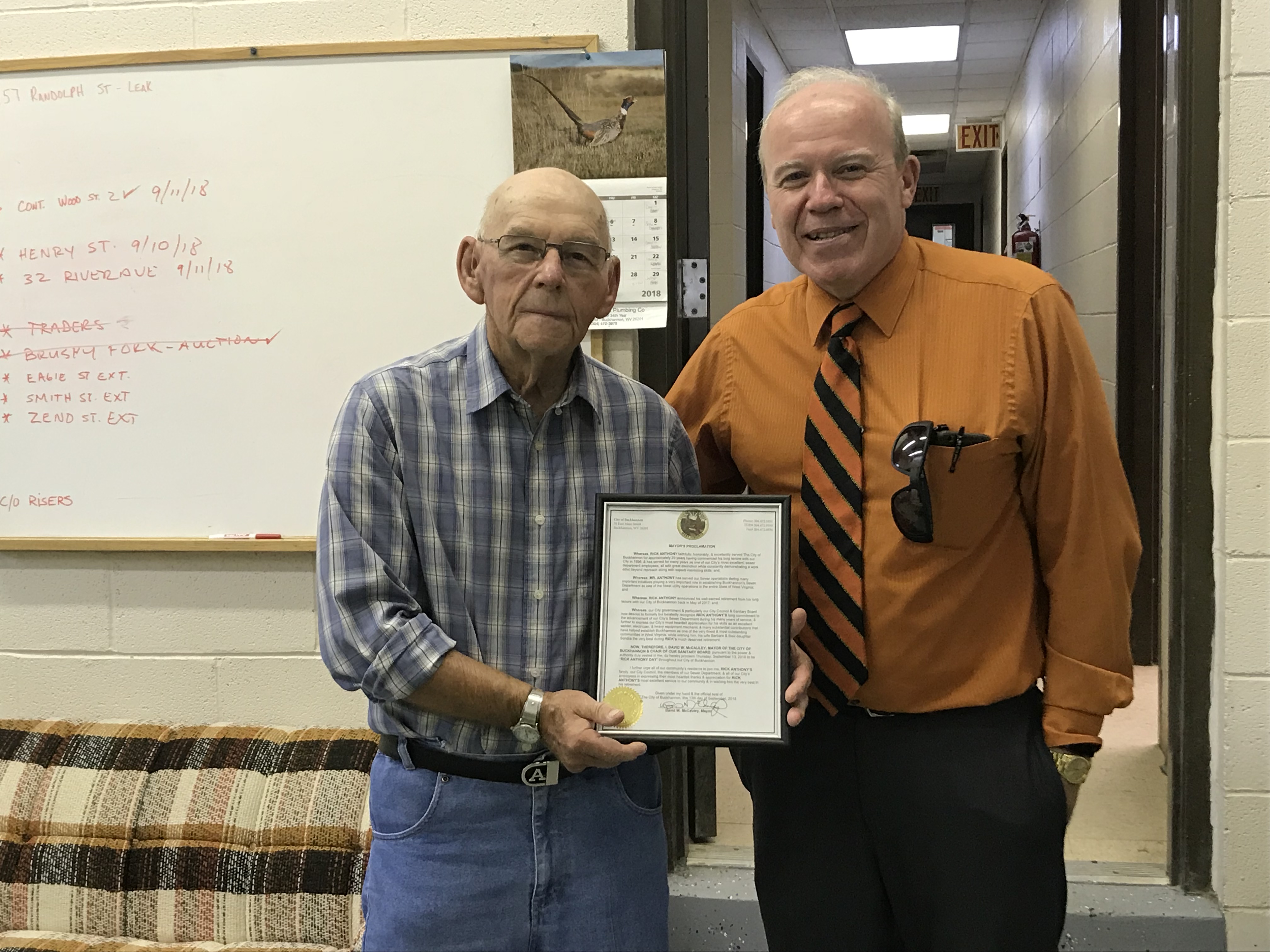 Sewer Engineer, Erasmo Rizo, presents a clock to Mr. Anthony in thanks for his many years of service.

BUCKHANNON, WV: On Thursday, Rick Anthony of the City of Buckhannon’s Sanitary Sewer Department celebrated 20 years of service to the community with co-workers and friends at the Sam Ludlow Sewer Plant in Buckhannon. Anthony, who is now 80 years old, actually retired in May 2017. But, due to health issues, the celebration had to be postponed. During the event, Sewer Department Supervisor Erasmo Rizo, Sanitary Sewer Engineer, Sam Ludlow, fellow employees, Tim Rock, Buck Samples, and others, all shared stories of their time working together with Mr. Anthony, noting his dedication and positive spirit.

Longtime Sanitary Sewer Engineer Sam Ludlow remarked that Anthony already “had a wealth of experience when he came (to the Sewer Dept)” and understood what a vital service they provided for the community. He also noted Anthony’s dedication to the job during his battle with kidney disease, always performing the job and in good spirits, despite having dialysis treatments until eventually receiving a kidney transplant. Mayor McCauley expressed gratitude on behalf of the entire City by telling Anthony, “We don’t bake bread and we don’t sell cans of soup: we are about service. You epitomize service and we thank you for being a part of our family.” The mayor went on to read an official proclamation declaring September 13, 2018 “Rick Anthony Day”.

Mr. Anthony spoke after receiving the proclamation & retirement gifts (including a hand-hewn rocking chair and commemorative clock), sharing that in addition to celebrating his retirement, he and his wife are celebrating 58 years of marriage this Saturday. He said it has been an”honor and pleasure to work with everybody” and that “the belt press was one of the most amazing things that I’ve been around and I’m honored to have helped put that together.” Fellow employee Dan Baker confirmed that the belt press and catwalk have made operations much more efficient in maintaining the tanks and that was Mr. Anthony’s idea.

Thank you, Rick Anthony, for your service to the City and we wish you well in your much-deserved retirement!

Whereas, RICK ANTHONY faithfully, honorably, & excellently served The City of Buckhannon for approximately 20 years having commenced his long tenure with our City in 1996, & has served for many years as one of our City’s most excellent, sewer department employees, all with great distinction while constantly demonstrating a work ethic beyond reproach along with superb mentoring skills; and,

Whereas, MR. ANTHONY has served our Sewer operations during many important initiatives playing a very important role in establishing Buckhannon’s Sewer Department as one of the finest utility operations in the entire State of West Virginia; and,

Whereas, RICK ANTHONY announced his well-earned retirement from his long tenure with our City of Buckhannon back in May of 2017; and,

Whereas, our City government & particularly our City Council & Sanitary Board now desires to formally but belatedly recognize RICK ANTHONY’S long commitment to the advancement of our City’s Sewer Department during his many years of service, & further to express our City’s most heartfelt appreciation for his skills as an excellent welder, electrician, & heavy equipment mechanic & many substantial contributions that have helped establish Buckhannon as one of the very finest & most outstanding communities in West Virginia, while wishing him, his wife Barbara & their daughter Sondra the very best during RICK’s much deserved retirement.

NOW, THEREFORE, I, DAVID W. McCAULEY, MAYOR OF THE CITY OF BUCKHANNON & CHAIR OF OUR SANITARY BOARD, pursuant to the power & authority duly vested in me, do hereby proclaim Thursday, September 13, 2018 to be “RICK ANTHONY DAY” throughout our City of Buckhannon.

I further urge all of our community’s residents to join me, RICK ANTHONY’S family, our City Council, the members of our Sewer Department, & all of our City’s employees in expressing their most heartfelt thanks & appreciation for RICK ANTHONY’S most excellent service to our community & in wishing him the very best in his retirement.

Given under my hand & the official seal of
The City of Buckhannon, this 13th day of September, 2018