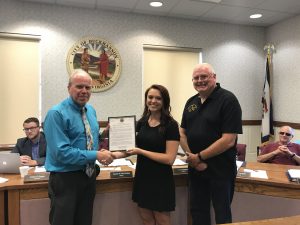 WHEREAS, Elizabeth J. “Binky” Poundstone served the City of Buckhannon for 37 years in several capacities including as a member of the City Council, the longtime City Recorder & Treasurer, & Mayor; and,

WHEREAS, Mrs. Poundstone died while serving as our City’s Mayor on September 7, 2000, leaving a rich & selfless legacy of devoted public service to our City & further to the youth of our Buckhannon-Upshur community; and,

WHEREAS, Mrs. Poundstone’s family in 2008 proposed to the City Council that a family funded scholarship be established with Five Hundred Dollars ($500) to be awarded in August of each year in memory of Mrs. Poundstone to a deserving student seeking to attend college whose parent or other guardian or family member is or had been an employee of the City of Buckhannon, or which employee in their own right is seeking to further their own education through college attendance; and,

WHEREAS, the City Council considered & approved the award of the Poundstone family scholarship proposal during its regularly convened meeting of July 3, 2008, agreeing to the City’s participation in the annual scholarship application, review, & selection process; and,

WHEREAS, as a consequence of that process that included the review & selection committee’s consideration of several, very well qualified applicants, the committee has determined that the 11th recipient of the annual Elizabeth J. “Binky” Poundstone Memorial Scholarship shall be LAUREN BROOKE STEWART, of Buckhannon, being the daughter of 22 year veteran, police officer, MARK STEWART, and her mother, Laura Ann Stewart; and,

WHEREAS, the Poundstone family & the entire City of Buckhannon family desire to formally recognize LAUREN BROOKE STEWART & wish her the very best of luck as she continues her studies this fall as a sophomore majoring in chemistry & minoring in criminal justice at West Virginia Wesleyan College in Buckhannon.

NOW, THEREFORE, I, DAVID W. McCAULEY, MAYOR OF THE CITY OF BUCKHANNON, pursuant to the power & authority duly vested in me, do hereby proclaim the 11th recipient of the annual Elizabeth J. “Binky” Poundstone Memorial Scholarship to be LAUREN BROOKE STEWART. MS. STEWART further shall be recognized in perpetuity as the recipient of this prestigious award through the inscription of her name upon a placard to be displayed in the main foyer of Buckhannon’s City Hall along with all past & future Poundstone Memorial Scholarship recipients.

Given under my hand & official seal of
The City of Buckhannon, this 2nd day of August, 2018