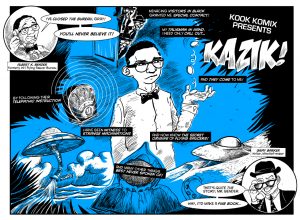 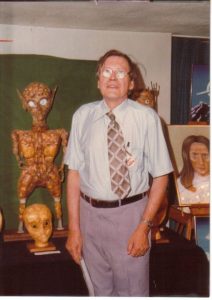 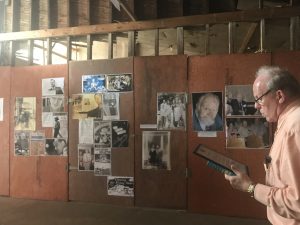 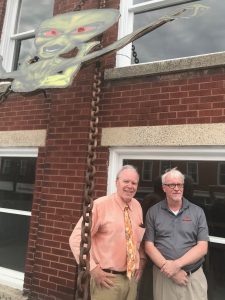 BUCKHANNON, WV: Monday marked World UFO Day for all those who wonder, “Are we alone in the universe, and if not, have other intelligent lifeforms visited Earth?” One famous Buckhannon resident, Gray Barker, was a noted UFO and science fiction writer, as well as the manager of the Colonial Theatre. City representatives joined Neil Roth, a friend of Barker’s, to celebrate Barker’s legacy and the Colonial Theatre’s connection to the great unknown.

Whereas, World UFO Day is celebrated all over our globe by throngs of people each July 2; and,

Whereas, one of Buckhannon’s former residents & business operators, GRAY BARKER, was one of the most prolific UFOlogy & science fiction writers in literary history having authored the acclaimed Saucerian, & having popularized The Flatwoods Monster that allegedly appeared in MR. BARKER’s hometown of Flatwoods on September 12, 1952, & GRAY BARKER having further managed Buckhannon’s historical, Colonial Theatre from 1973-80 that our City is currently refurbishing; and,

Whereas, GRAY BARKER’s literary contributions concerning UFOs resulted in the adaptation of his literary works to several movies including The Philadelphia Experiment, The Men in Black series, & The Mothman Prophecy; and,

Whereas, it is very appropriate & most relevant for our Buckhannon-Upshur citizenry to embrace all of the fun & entertainment associated with World UFO Day & science fiction in general, particularly given the rich legacy of GRAY BARKER in our community.

NOW, THEREFORE, I, DAVID W. McCAULEY, MAYOR OF THE CITY OF BUCKHANNON, pursuant to the power & authority duly vested in me, do hereby proclaim Monday, July 2, 2018 to be “GRAY BARKER WORLD UFO DAY” throughout our City of Buckhannon.

I further urge all of our B-U residents to embrace all of the fun & intrigue associated with UFO lore & science fiction in general & to participate in the planning of events to best celebrate World UFO Day & further to become better aware of the rich legacy & many literary contributions of one of our former own, MR. GRAY BARKER!

Given under my hand & the official seal of
The City of Buckhannon, this 2nd day of July, 2018

Welcome to this afternoon’s remembrance of the great Gray Barker (1925-84), the prolific science fiction writer & arguably the most famous UFOlogist in history who from 1973-80, managed our very own Colonial Theatre.  Fourteen months ago today, on what would’ve been his 92nd birthday, our City celebrated Gray Barker with the dedication of the placard on the facade of our theatre that he once managed.  Today is the perfect day to again remember Mr. Barker, because today is recognized as World UFO Day to celebrate the anniversary of the most famous event in UFO history, that is, the Roswell, New Mexico incident occurring on July 2, 1947- 71 years ago today- that spawned the litany of science fiction works about Area 51 as well as the conspiracy theories about government cover-ups over the retrieval & keeping of extraterrestrial bodies recovered from a flying saucer crash site.  Mr. Barker wrote the books that led to the movies- The Philadelphia Experiment, Men In Black, & The Mothman Prophecy.  The Men in Black brand was all about secret government officials who allegedly coerced witnesses from talking about their sightings of UFOs.

The World UFO website states that the purpose in recognizing today is- “to raise awareness of ‘the undoubted existence of UFOs’ and to encourage governments to declassify their files on UFO sightings.”  Our purpose in celebrating today is simply to exploit the connection to one of our celebrated, former own- Gray Barker, to the science fiction & UFO lore that he spent a lifetime writing about.  Undeniably, Gray Barker was one of the most colorful characters ever to walk our streets.  Mr. Barker wrote the monthly magazine The Saucerian for decades.  In 1956, he wrote They Knew Too Much About Flying Saucers, which was published by University Books in 1956.

In the foreword to “They Knew Too Much,” then President & Publisher of the Clarksburg News, Inc., H.G. Rhawn wrote this letter to Mr. Barker’s publisher, University Books- [reading]-

And in case you had any doubts about the extraordinary writing ability of Gray Barker- indulge me for but a couple minutes as I read the first page or so of his celebrated “They Knew Too Much” work- chapter one is entitled- A Hilltop, West Virginia- [reading]  Gray Barker was highly gifted.  Today & every July 2 from now on- we’ll remember his extraordinary talents- his writings, his storytelling, & his entrepreneurial spirit.  Long live Gray Barker!