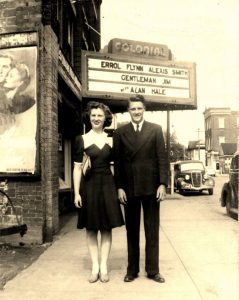 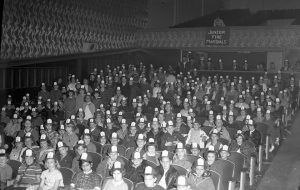 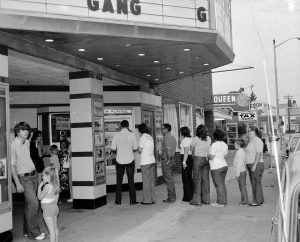 The Colonial Theatre was constructed in 1924 and is listed as a contributing structure in Buckhannon’s Downtown Historic District for its exterior façade.   The architect is not  known at this time. Under the ownership of Garland West, it was operated as the Colonial Theater from 1930-1966 and underwent two major building renovation phases. In 1966, the West’s leased the cinema to Park, Inc. of Clarksburg, WV.  In the early 1970’s, Grey Barker assumed management of the cinema, and renamed it The Cinema V.  Barker is a noted UFO author and enthusiast, who died in 1984. Peter Griesinger, a documentary filmmaker, also has ties to the building. In the early 1980’s the cinema was renovated into a bar. The building contains 4,400 square feet on first floor and basement, and a balcony containing 2100 square feet.

In the last few years, the building was beginning to show signs of severe deterioration both inside and out, and the future of the former theatre looked grim. Buckhannon City Council foresaw that the building would either eventually need to be demolished–potentially at the City’s expense if the building was abandoned–or another transfer of ownership might ensue with minimal repairs undertaken and a change of use not fitting with the historic downtown theme and culture.

Buckhannon City Council held a town hall meeting in March 2017 to seek input from the community about the building and its future (see the attached minutes below). Council received suggestions ranging from a venue for youth activities, performances, training, and business meetings, among others. The dominant feedback supported public purchase of the property and renovating the space for the benefit of the community.

Following the positive response to the acquisition at the town hall, the City of Buckhannon submitted a grant proposal to acquire and renovate the Colonial Theatre for historic preservation to the West Virginia Division of Culture and History in the spring of 2017. Despite heavy competition with numerous projects contending for a piece of the pie, the Colonial Theatre proposal received $102,000 in award dollars for this grant cycle.  Thus far, local arts organizations have donated $5,500 toward the renovation.

The City of Buckhannon purchased the old theatre located at 48 E. Main Street in January 2017 at a cost of $60,000, significantly below the appraised value of $80,000. As of February 2018, city employees have worked approximately 1,600 hours in demolition and clean-up work, including floor replacement and roof repair, meeting the match requirements for the grant funding of $102,000. Grant funding has provided $52,000 for materials and roof repair.

In October 2017, Buckhannon Community Theatre presented a special showing of “Rocky Horror Show” at the theatre and was a big success. In 2018, ART26201 presented a Variety Show in June and the City hosted Fall Fest performances in September with a “Battle of the Bands” and Appalachian folk dancing and old-time music.

City/ART26201 collaboration pays dividends with another $67,000 toward Colonial Theatre renovation

War of the Worlds starts Thursday at Colonial Theatre!

Economic Impact of the Arts: